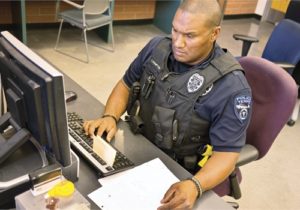 Course Objectives:  This course is designed to train officers in basic concepts of report writing. Upon successful completion of this course, the student will have learned:

To begin: Go to "Course Home" then click on the "Expand All" arrow. Under "Topics" you will begin with the lecture.

Will Feltmann is the Jail Administrator for McLeod County and had been a Correctional Officer for McLeod County since 2005.  Will has served as a Use of Force Instructor, T.A.S.E.R. Instructor, O.C. Instructor, and Field Training Officer and as a member of the Minnesota Sheriffs’ Association Jail Standardized Training Committee.  Before starting his career in corrections,  he earned his Bachelor’s Degree from South Dakota State University.

Rick Hodsdon currently works full time in the Washington County Attorney’s Office in Stillwater, Minnesota.  Rick deals with numerous aspects of the office involving data practices, HIPAA, the sheriff’s office, personnel matters, criminal prosecution and civil litigation. Rick has been the Minnesota Sheriffs’ Association legal counsel since 1987.  He is on the faculty of Northwestern University Police Command School and teaches throughout the United States on criminal justice issues.  Rick has a J.D. and Master’s Degree in Public Administration and he is admitted to practice before the courts in Minnesota, 8th Circuit, and the U.S. Supreme Court.

Former Anoka County Chief Deputy Tom Wells  joined the Minnesota Sheriffs’ Association as the Conference and Training Coordinator.  Tom worked at the Anoka County Sheriff’s Office for 31 years.  During his career, he held positions from Patrol Deputy, Patrol Sergeant, Lieutenant to Captain of the Criminal Investigation Division.  Tom was a member of the SWAT team for 17 years, serving the last six as the team commander.  Tom was appointed Chief Deputy in March 2011 where he oversaw the six divisions of the Sheriff’s Office.  Tom graduated from the 238th class of Northwestern University’s School of Police Staff and Command.

Jim Franklin served as the Executive Director of the Minnesota Sheriffs’ Association (MSA) for 14 years.  Jim’s vision and leadership grew the training division to include training over 5000 people a year, from conferences to day long trainings, from sheriffs to patrol staff to administrative staff.  Prior to the MSA, Jim was the Director of Public Safety in Mankato Minnesota.  He served as State Emergency Director under the Arnie Carlson Administration.  Jim has been a fire chief and a police chief.   Jim had worked in various areas of law enforcement for over 50 years.

Need additional help after the course? Check out the free report writing resources at www.YourPoliceWrite.com.

Login
Accessing this course requires a login. Please enter your credentials below!
Lost Your Password?